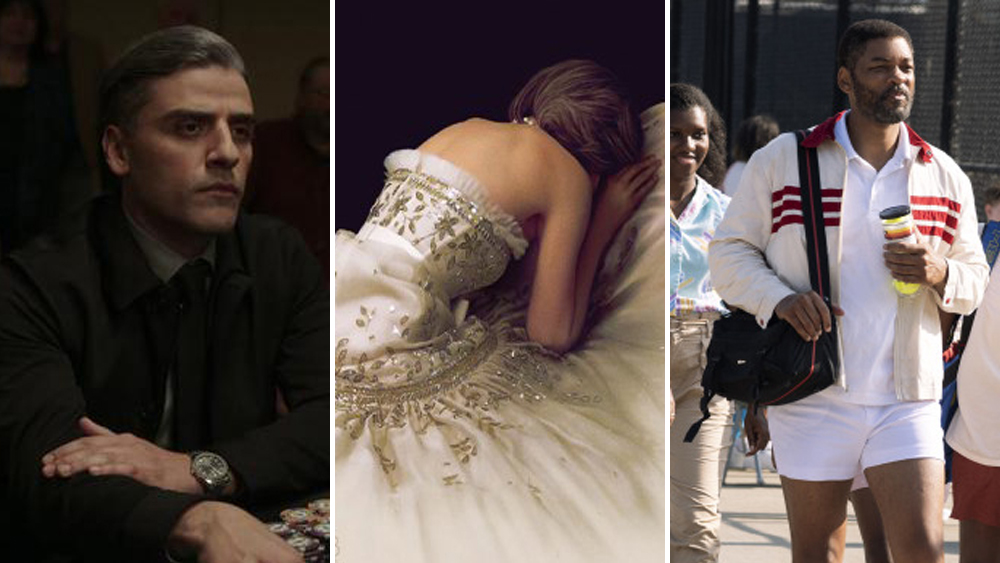 A glum arthouse market may be entering a gateway weekend into happier days after months of distributors — with rare exceptions — pulling out their hair at dismal per-screens averages. That’s because festival buzz is mounting for film after film – from Card Counter, Dune and Spencer (debuted in Venice, opening respectively Sept 10, Oct. 22 and Nov. 5), to King Richard and Cyrano (premiered at Telluride, in theaters Nov. 19 and Dec. 31, respectively).

The Eyes of Tammy Faye and Dear Evan Hansen open in theaters on Sept, 17 and Sept. 24 after Toronto premieres. Wes Anderson’s The French Dispatch from Cannes rolls out Oct. 22. Warner Bros’ Sopranos prequel The Many Saints of Newark has an Oct. 1 release date. Kenneth Branagh’s Belfast has a Nov. 12 theatrical date after a world premiere in Toronto (and a glimpse at Telluride.)

It’s like the Marvel Cinematic Universe of arthouses, films set to give a bump to a specialty market pummeled by the Delta Variant, which has kept its generally older demos at home. Other headwinds: the prolonged absence of the ArcLight Hollywood, and the fact that solid specialty fare — like Sundance charmer Coda for instance — is out of the mix. Video giants, in Coda’s case Amazon, can offer limited runs in cinemas but their focus is not on theatrical marketing. Some in the biz also point the finger at lackluster product, inadequate marketing and slim or no exclusive theatrical windows.

It was always anticipated the space would pick up in the fall ahead of awards season as big name films with crossover appeal roll out. Ahead of that, we’ve got Labor Day weekend and another mix of eclectic, often pedigreed films.

Neon, which had success with Pig, earlier this year, is launching The Year of the Everlasting Storm at the IFC Center in New York. It heads to the Laemmle Royal in LA next week with other markets to follow. The anthology film features stories from seven auteurs from around the world “chronicling this unprecedented moment in time.” They are Jafar Panâhi, Anthony Chen, Malik Vitthal, Laura Poitras, Dominga Sotomayor, David Lowery and Apichatpong Weerasethakul.

Set in the Japanese community of Sao Paulo in Brazil — the largest Japanese diaspora in the world — it follows Akemi (Masumi), an orphan who discovers she is the heiress to half of the Yakuza crime syndicate.

From Strand Releasing, Mogul Mowgli, a rap drama with Oscar nominee Riz Ahmed. It opens in 13 theaters today followed by a broader rollout to another 30 or so in coming weeks.

In honor of Labor Day Greenwich Entertainment has The Big Scary ‘S’ Word, the directorial feature debut of Yael Bridge (producer of Saving Capitalism) in 14 theaters and on demand. The S is for socialism. Featuring interview with Bernie Sanders, Alexandria Ocasio-Cortez, Cornel West.

IFC is releasing We Need to Do Something, a psychological horror film directed by Sean King O’Grady and starring Sierra McCormick, Vinessa Shaw, and Pat Healy that premiered at the Tribeca Film Festival.

The Gateway from Lionsgate with Frank Grillo, Olivia Munn, Shea Whigham, in 25 theaters.

Anne At 13,000 Feet from Cinema Guild. Director Kazik Radwanski (Tower, How Heavy This Hammer), with Deragh Campbell. Opens at the Quad in NY today then rolling out.

Bad Bunny Reaches Preliminary Settlement in “Safaera” Copyright Infringement Lawsuit
Steven Spielberg Has Thoughts About The Dark Knight’s Oscars Snub And How Top Gun: Maverick Fared This Year
TikTok Star Alix Earle Is Getting Married—But It’s Not What You Think
Bill Maher Makes A ‘Private’ Confession About His Travel Habits On ‘Real Time’
Barbarian’s Director Just Got A Massive Payday To Make His Second Horror Feature