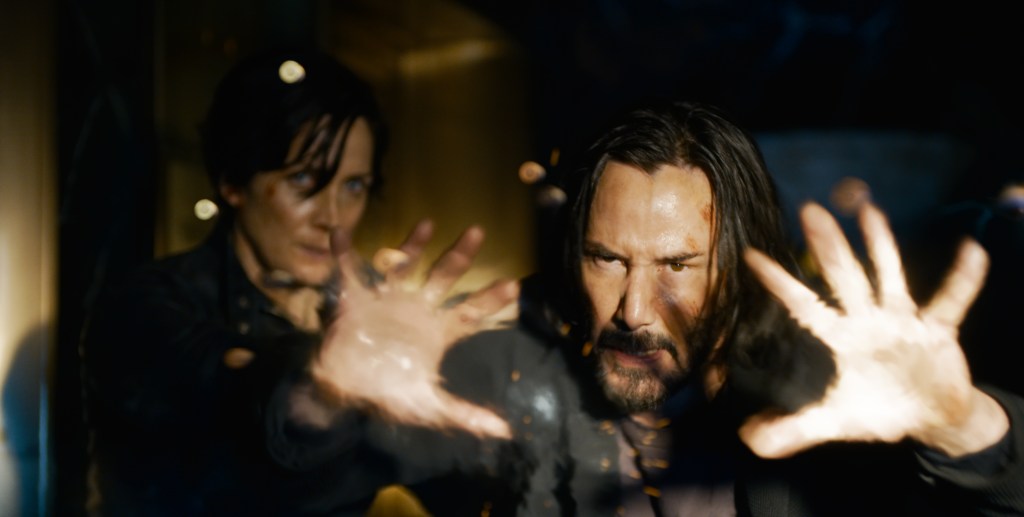 Update: Warner Bros. has revealed this morning what we first saw at CinemaCon, the trailer for The Matrix: Resurrections. Why the more-than-two week delay? Because the studio’s James Wan movie Malignant is opening this weekend in cinemas (and on HBO Max). In recent years, Warners has typically debuted a fresh trailer for a hot film on top of another hot title that’s opening; i.e. the Birds of Prey trailer timed to It: Chapter Two exactly two years ago, and the Tenet 40-second teaser which ran with Hobbs & Shaw during the first weekend of August, 2019.

If you read our previous post below, you’ll finally be able to match all the words with images and understand what we’re talking about. The Matrix Resurrections, co-produced by the franchise’s long-time financier Village Roadshow, is a reboot and sequel of sorts: Keanu Reeves’ Neo and Carrie Anne Moss’ Trinity live in a near future San Francisco, and it’s though their memories have been swiped. They’ve been reset and the movie looks to be about how they regain their power. Neo is taking the blue pills, which keep in line with the reality around him. But then there’s Yahya Abdul-Mateen II’s Morpheus-like character who lures Neo to live a life on the red pill, complete with a return to Kung-fu training. Jessica Henwick looks to be a fighter on the alternative reality side of life much in the way that Jada Pinkett Smith’s Niobe was in the earlier movies.

The Matrix Resurrections is set for release on Dec. 22 in theaters and on HBO Max and in a clever marketing spin, the tag line in posters is “The Choice is Yours”.

Warners premiered the trailer this AM at 6 AM PST with a two minute lead-up of score music.

Watch the trailer above.

Previous Aug. 24: ‘Matrix 4′ & Title Unveiled During Warner Bros.’ CinemaCon Reel – Warner Bros came with a huge reveal Tuesday at its CinemaCon presentation: the trailer for its Village Roadshow co-production Matrix 4. And Warners also gave us the official title too: The Matrix: Resurrections.

The trailer begins with Neil Patrick Harris talking to Keanu Reeves’ Neo. A near future San Francisco. It appears that Neo is trapped in a humdrum world, much like his first self in the 1999 movie. He’s just not getting his surroundings.

“Am I crazy?” asks Reeves’ Neo. “We don’t use that word in here,” says Harris’ therapist.

Reeves comes in contact with Carrie Anne Moss’ Trinity in a cafe: “Have we met?” she asks Neo.

A shot of blue pills spilling into a sink, as Jefferson Airplane’s “White Rabbit” song plays.

Then a shot of Neo distorting into an old man in the mirror. A younger Morpheus tells Neo “time to fly,” handing him a red pill.

Then a lot of jumping, a lot of twists in midair, karate and all the acrobats we expect from a Matrix movie.

The pic, directed by Lana Wachowski, is still slated to come out on December 22.

No word yet as to when the trailer will hit social media — this was for the CinemaCon crowd only.

Prior to the trailer rolling, Reeves and Moss appeared in a making-of clip exclaiming how the first movie impacted their lives. Said Reeves: “The first Matrix felt like something beyond yourself… You’ll hear the sentence ‘The Matrix changed my life.’ I say, ‘Thank you, it changed mine too.”

Moss exclaimed about her bullet-time shoot ’em sequence from the 1999 title: “I never thought ‘Dodge this’ was going to be a big deal.