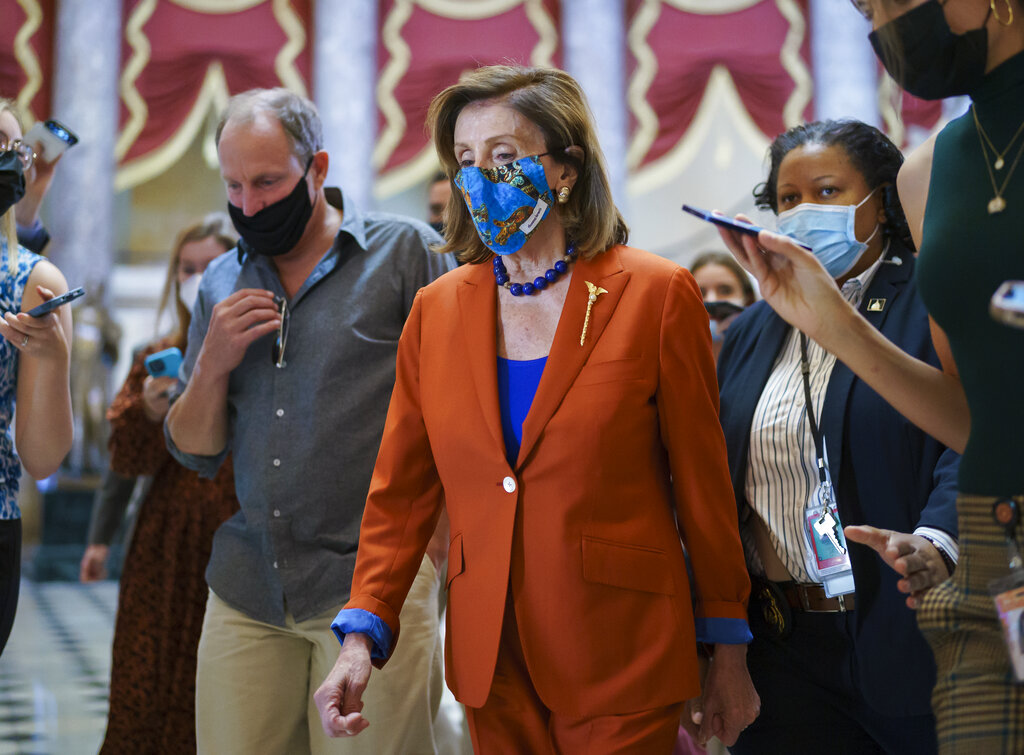 White House Press Secretary Jen Psaki said Wednesday that this week’s high-stakes, unresolved and unpredictable drama on Capitol Hill was “like an episode of a TV show.”

“Maybe The West Wing, if something good happens. Maybe Veep if not,” she said.

She was talking specifically about the prospects that a key part of Joe Biden’s agenda, the roughly $1.2 trillion infrastructure bill, will even make it to the House floor, as is planned, on Thursday. The fate of that piece of legislation, already passed by a bipartisan majority of the Senate, depends on whether Democrats can come to an agreement on a much larger $3.5 trillion package, known as the Build Back Better Act, which would expand the social safety net and provide huge outlays to tackle and counter climate change.

Democrats need every vote in the Senate for the latter piece of legislation to stand a chance. But two moderates, Sen. Joe Manchin (D-WV) and Sen. Kyrsten Sinema (D-AZ), are balking at the price tag and other key elements. Progressives, meanwhile, vow to oppose the infrastructure package unless they get some kind of guarantee on passage of the Build Back Better Act.

In other words, it’s an intra-party standoff.

But that’s not even the immediate drama. Government funding runs out on Thursday night, so absent some kind of congressional action, there will be another shutdown. There is widespread belief that Congress will come through with a bill in time.

Much less certain is what will happen with the debt limit. Treasury Secretary Janet Yellen has warned that the government will run out of cash reserves by Oct. 18 unless the borrowing threshold is raised. If not, the U.S. risks defaulting, something the country has never done and a scenario that economists say would send the economy into free fall.

Senate Minority Leader Mitch McConnell (R-KY) says he knows that the U.S. can’t default, but he wants Democrats to bear all responsibility for raising the debt limit and connect it to their $3.5 trillion package, via a process called reconciliation, as a way to tag them as out-of-control spenders. Senate Majority Leader Chuck Schumer (D-NY) refuses to attach a debt limit increase to that legislation, calling it “risky” and time consuming while blasting Republicans for trying to score political points when the U.S. credit rating is at stake. Schumer proposed an alternative scenario — a stand-alone bill to raise the debt ceiling that could pass only with the votes of Democrats — but McConnell refused. They barely looked at each other on the Senate floor as they outlined their positions Tuesday.

The polarized Congress has been here before, but some veteran Capitol Hill reporters say that they have never seen it quite like this.

“I’ve covered a lot of these debt limit fights dating back to 2011,” Jake Sherman, co-founder of the site Punchbowl News, wrote on Twitter. “This may be the worst/scariest.”

How does the average viewer see all the urgency? Maybe not. It’s a big week in Washington, but the policy jargon being bandied about, with terms like “CR,” debt limit, reconciliation and even infrastructure, is over the heads of many — even plenty of editors less interested in the mechanics of what is going on and more interested in the end result. Is the government going to shut down? Will the U.S. default?

That’s probably why, when it comes to the Biden agenda, there has been so much focus on Manchin and Sinema, two colorful personalities who have for months been routinely trailed by a gaggle of reporters but have yet to publicly say what kind of Build Back Better/reconciliation bill they are willing to accept. To reporters, Manchin has been ever accessible; Sinema less so, but she did have a sharp response on Wednesday to a question from Frank Thorp V. He asked what she would say to progressives who are frustrated that they don’t know where she is in all of this.

No one is predicting much of anything so far, even as it’s all being covered as a make-or-break moment for Democrats, the Biden agenda and the country, albeit all a bit difficult to explain.

In the midst of all of this on Wednesday was the appearance of Woody Harrelson, in town to shoot HBO’s limited series The White House Plumbers. He was spotted at the Capitol with House Speaker Nancy Pelosi.

Later, Pelosi was asked whether she was worried that she would not have the votes for the infrastructure bill to pass on Thursday.