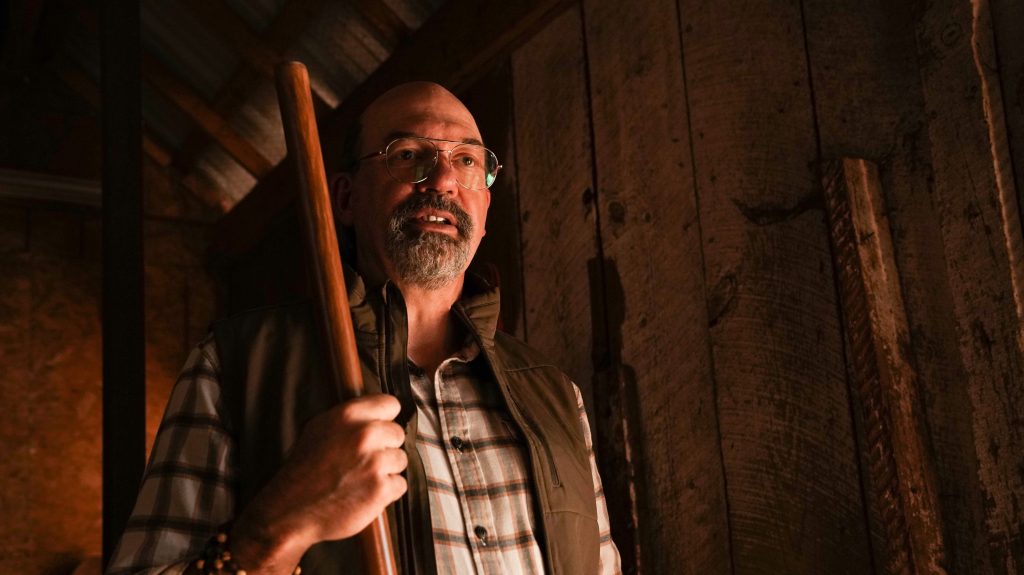 A couple of major twists and compelling new mysteries presented themselves in Big Sky‘s Season 2 opener, which saw John Carroll Lynch return from beyond the TV grave. In an interview with Deadline, the SAG Award winner confirmed the identity of his new character and teased his storyline.

As the episode titled “Wakey, Wakey” opens, the primary antagonist of Season 1, sex trafficking trucker Ronald (Brian Geraghty), is on the lam. Private detective Jenny (Katheryn Winnick) is still recovering from the gunshot wound inflicted during his escape, and like her colleague Cassie (Kylie Bunbury), remains intent on taking him down. While Cassie distracts herself with work at Dewell & Hoyt, hoping for a clue that will bring her to Ronald, Cassie visits Sheriff Tubb (Patrick Gallagher) to inform him that she wants to rejoin the force. In the midst of all this, a man is murdered and stuffed into a body bag by a mysterious new baddie, in what appears to be a drug deal gone wrong.

Cassie finds her first clue as to Ronald’s whereabouts in video footage provided by a suspended Mark Lindor (Omar Metwally), which shows his girlfriend Scarlet (Anja Savic) getting into a car with State Trooper Cormac Dewey (Andreas Aspergis) on the day of his escape. Cassie and Mark then go to his residence and are warned against digging deeper, coming to learn that they’re being surveilled by someone Dewey won’t name. Cassie later meets Jenny at a bar, learning of her decision to return to the force. After the pair toast to continuing on, in some fashion, as partners, Cassie makes her exit and leaves Jenny to run into Travis (Logan Marshall-Green), a man from her past who is now working as an undercover officer.

As Jenny and Travis get hot and heavy back at her place, we reach the climax of the episode, returning to the murderous drug pusher from earlier, who is badly injured after the man in the back seat of his truck springs to life, causing him to flip it. A number of teenagers, including Cassie’s babysitter Max (Madelyn Kientz) and her friend Harper (Troy Leigh-Anne Johnson), see this all go down. Before being shot and killed by a mysterious man in a cowboy hat, the injured individual urges the kids to grab the bags, full of money and drugs, from his truck, and get away from the scene. As the kids flee, they’re watched by yet another ominous figure, who’s been hiding in the bushes. While Max elects to stash the bags at her house until she and her friends can figure out what to do with them, they later realize that they’re in possession of $500,000 and decide to keep it.

The next day, Jenny heads to investigate the scene of the car crash, as Cassie returns with Jerrie (Jesse James Keitel) to Trooper Dewey’s, only to find that he’s been brutally murdered, and that he had been holding onto surveillance photos of her and her son. The episode’s penultimate twist comes at a small ranch, where a middle-aged fellow with a ponytail dances around to the classic Turtles tune “Happy Together.” When he turns his face to the camera, we encounter a new character played by Lynch, who in Season 1 portrayed Ronald’s terrifying accomplice, Rick Legarski. The final twist comes as Lynch’s new baddie unlocks a cabinet, exposing a chained-up Ronald to view. “Wakey, wakey,” he croons. “Ronald, my dear boy, let us begin.”

Lynch’s original Big Sky character from the Montana Highway Patrol was killed in the Season 1 finale by his wife Merrilee (Brooke Smith), who hit him repeatedly with a hammer. But of course, it was revealed in the course of the show’s first go-round that the officer had a twin. The actor confirmed in a recent conversation with Deadline that Rick’s brother, Wolfgang Legarski, is his new character, and described his arc this season as an “attempt at redemption for both Wolf, because of his brother’s actions, and Ronald, trying to come to a place where Ronald can atone for his sins, and Wolf can clean up the mess his brother left, in terms of his life and the life of his family.”

In Season 2, Lynch has gotten his first chance to work with showrunner Elwood Reid, who joined the series in the back half of its first season. “One of the things that Elwood and I talked about was that Wolf has had to clean up after his brother their whole lives,” the actor shared, “and this is yet another circumstance in which he’s had to do that.”

Even if Rick is long gone, will we learn more about him, as we follow his twin brother? “Absolutely,” Lynch says. “I think it will become clear that the facade of Rick Legarski was there through his whole life, not just through the periods of time that the audience knew him—that he had been playing at being someone for his whole life.”

Lynch is excited this season about honing in on “one mystery,” with Reid expanding in surprising ways on the world first brought to the screen by series creator David E. Kelley. “You read the scripts and yet again, you go, ‘I can’t believe that’s happened.’ So hopefully, that joy will continue through all the episodes of this year,” he said. “As far as the Wolf Legarski of it all, there’s a lot of stuff upcoming that is surprisingly moving, chilling and really weird. There’s a lot of really weird things that happen on Wolf Ranch.”

Given the frequent episodes of violence inflicted on Rick culminating in his demise in Season 1, one wonders how Lynch will feel, if he’s to be killed off yet again, after returning for another installment. It seems, though, that he’s taking that possibility in stride. “[In my career], I have melted in lava; I’ve been shot in the head three times. I’ve been hanged; I’ve been stabbed,” he says with a laugh. “So, dying is a nice living for me.”

Lynch first announced his return to Big Sky at TCA on August 26. The series, based on the books by C.J. Box, is produced by 20th Television and A+E Studios, with Kelley exec producing alongside Reid.