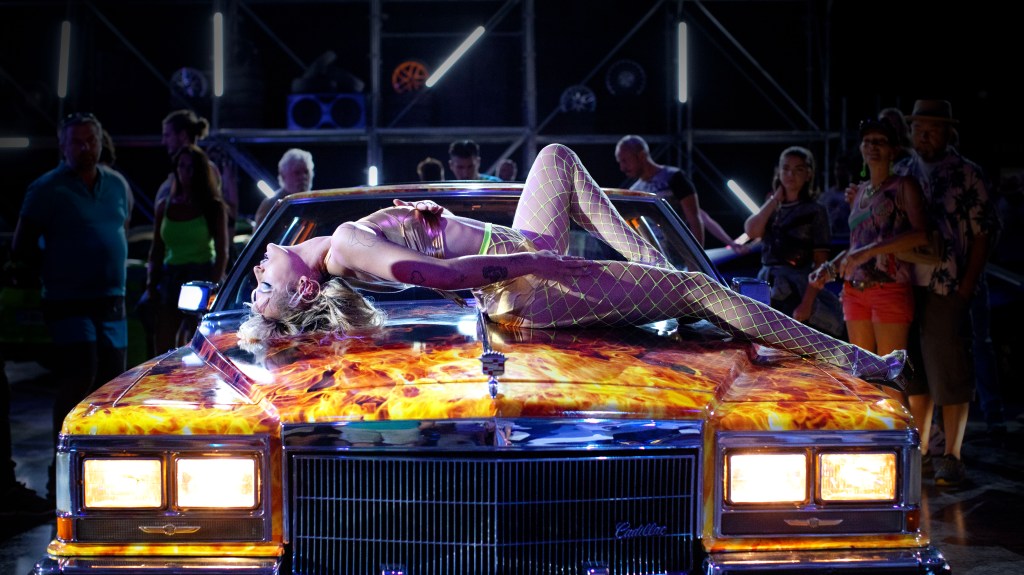 Neon presents Julia Ducournau’s Titane, the lauded Palme d’Or winner set to test a stressed specialty market even as Messrs. Venom and Bond crash into wide release this weekend and next. The edgy, high octane French tale about a woman with a metal plate in her head and an automotive fetish hits 562 screens in top 10 top North American markets.

Ducournau (RAW) is only the second female director to take the Palme d’Or and the first for directing solo. She also wrote the 93% Certified Fresh film that took the Midnight Madness Audience Award at TIFF and last week played to sold out audiences with standing ovations at the New York Film Festival. Deadline review here called it a fascinating, shock-driven genre picture. The website of Titane – titanium in English — opens with only a definition: “A metal highly resistant to heat and corrosion, with high tensile strength alloys, often used in medical prostheses due to its pronounced biocompatibility.” It stars Agathe Roussell and Vincent Lindon.

Can Titane’s Palme pedigree, critical acclaim and maybe a wow/curiosity factor make some box office noise? Neon has had success (Pig, Ailey) in a challenging market — one with fewer arthouses, trouble in the sector brewing even before Covid, and a core elder demo slower than others to return theaters. While we’ve seen power in Shang-Chi and other wide releases this fall, the indsustry is still scrabbling in the dark to discern patterns or sure paths in arthouse yet.

“It’s a crazy unpredictable landscape these days,” said Julie Dansker,” head of content at Shout Studios, which has its own critically acclaimed debut, the Western Old Henry, hitting a mix of arthouse and commercial screens, about 30. Starring Tim Blake Nelson (O Brother Where Art Thou), the character actor in his first lead turn, and written and directed by Potsy Ponciroli, it opens in New York (where Steve Buscemi moderates a Q&A with Nelson at the Quad Cinema Friday), in LA and a markets friendly to Westerns — from Austin to Chicago to Tulsa. It will expand and be available on premium VOD Oct 8.

The super well-reviewed film, see Deadline’s here, was a hit at Venice and, “because it’s such a good movie and reviews were so solid, I am hoping for word of mouth to hold and maybe get to like 50 [theaters] or something. But we are not looking at hundreds of screens,” Dankser said.

That’s in part because screens are harder to get. The weekly tentpole barrage nabs slots from specialty fare at some theaters. Pre-Covid, that was rarer. Dansker noted a category of “in-between theaters that are not full arthouses” that might have played Old Henry but instead gravitate to No Time To Die. “To be fair, the timing is always tough. After the year everyone had. People are starting to get back into seats and there’s a lot on the shelves.” And it depends on the film, Venom: Let There Carnage for instance has not been the rival Bond has in arthouses. Still, it’s been an issue lots of small distributors have been talking about — financially strapped theaters swerving out of the arthouse lane.

“We hope it’s not permanent. But it’s all so unknown. When we were developing this with Hideout [Pictures] we felt like an elevated indie Western with a legendary gunslinger at its core was something that we all wanted to see and it wasn’t out there in the marketplace. There’s always a place for a really well done Western. It could be an interesting sweet spot,” she said of the first film Shout fully produced and financed. As awards season approaches, “We want to plant a flag in the race.”

Old Henry follows a widowed farmer (Nelson) and his son who warily take in a mysterious injured man with a satchel of cash. When a posse of men claiming to be the law come for the money, the farmer must decide whom to trust. Defending against a siege of his homestead, he reveals a talent for gunslinging that surprises everyone, calling his true identity into question.

Gavin Lewis as the son here, and in the Hulu drama Little Fires Everywhere, has a strong fan base. As do costars Scott Haze, Stephen Dorf and country music maven Trace Adkinds.

Moving on, El Planeta, a limited release that exploded at the IFC Center last weekend is expanding to Museum of the Moving Image in New York and the Landmark Westwood in LA next weekend before moving to 10-15 more markets and digital Oct. 8. Deadline spoke with distributor Utopia for box office last Sunday and this week caught up with writer-director-producer Amalia Ulman, an Argentine born Spanish artist living in New York. It’s her first film.

The dark comedy, exploring contemporary poverty through a mother-daughter relationship, won raves at Sundance. It portrays a daughter (Ulman) returning home to a down-and-out Spanish town after the death of her father and reconnecting with her eccentric mother (the acting debut of real life mom Ale Ulman). The two hustle to maintain a semblance of their middle-class lifestyle shoplifting, stressing and joking in the face of impending eviction. The humor and sweetness in crisis stand out.

Ulman declined to say how low the low budget was but said that after being turned down by Spanish government funding much of it came from art world connections, often through bartering pieces. It’s filmed in black white with basically a two-person cast.

Ulman said she’d always wanted to make film and had set the stage for that in a number of performance and video works. One of her best known is the 2014 performance art piece “Excellences and Perfections” where she used her Instagram profile to chronicle a fake five-month performance inspired by extreme makeover culture, including pretending to get breast implants.

New projects include a television show about a female bullfighter, and a romantic-erotic film “set in the worst possible conditions” — a genetically modified soya plantation in Argentina. That’s all she could say.

Elsewhere in specialty, Lionsgate releases The Jesus Music, a documentary about the rise of contemporary Christian music from the Erwin Brothers (I Can Only Imagine, I Still Believe) in 249 theaters. The film explores the roots of Christian Contemporary Music and features intimate interviews with the genre’s biggest stars including Amy Grant, Michael W. Smith, TobyMac and Kirk Franklin. “Jesus Music” rose from America’s 1960s counterculture movement and humble beginnings at the Calvary Chapel in Costa Mesa, Calif.to become a multibillion-dollar industry and worldwide phenomenon.

Falling for Figaro from IFC on 44 screens. The TIFF Selects title directed by Ben Lewin (The Sessions) and starring Joanna Lumley (Absolutely Fabulous) and Danielle Macdonald (Patti Cake$) A brilliant young fund manager leaves her unfulfilling job and long-term boyfriend to chase her lifelong dream of becoming an opera singer. She meets a fellow opera student while in training, and what begins as a rivalry develops into something more.

Witch Hunt from Momentum Pictures takes us to a modern America where witches are real and witchcraft is illegal. A sheltered teenager must face her own demons and prejudices as she helps two young witches avoid law enforcement and cross the southern border to asylum in Mexico. Directed by Elle Callahan. With Gideon Adlon, Abigail Cowen, Elizabeth Mitchell, Echo Campbell.

Magnolia presents fantasy-drama Mayday, premiered at Sundance this year in the U.S. Dramatic Competition Section. Ana (Grace Van Patten) finds herself transported to a dreamlike and dangerous coastline. Once there, she joins a female army engaged in a never-ending war where the women lure men to their deaths with radio signals, like 20th century sirens. Though Ana finds strength in this exhilarating world, she comes to realize she is not the killer they want her to be. Written and directed by Karen Cinorre.

What Breaks The Ice from Cinedigm is a coming-of-age thriller about two 15-year-old girls, Sammy and Emily, who hark from different worlds but strike up a quick and deep friendship. But what should be the best summer of their lives takes an unexpected turn when they become accidental accomplices in a fatal crime. Written and directed by Rebecca Eskreis. With Sofia Hublitz and Madelyn Cline.