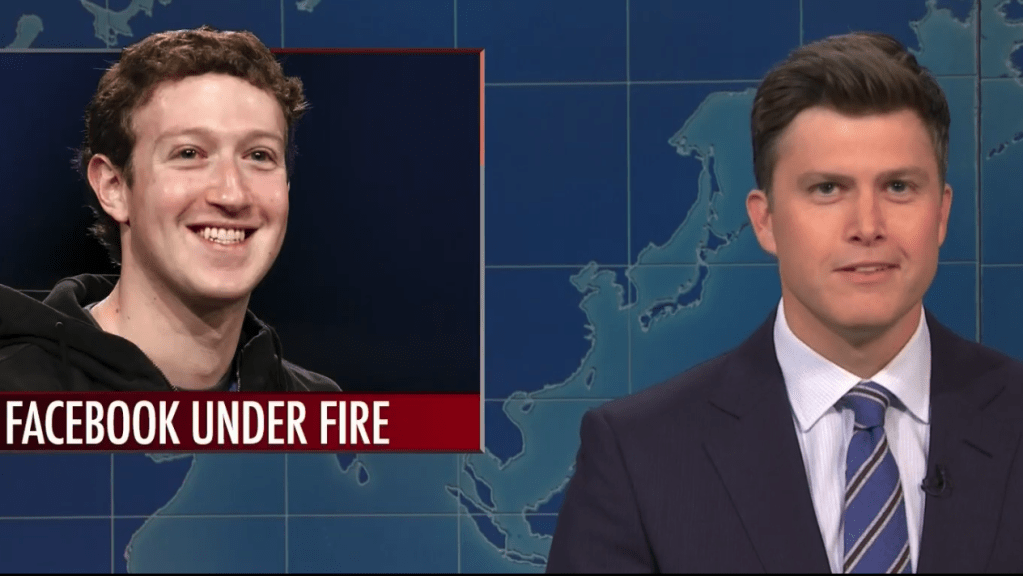 “This week, we found out that sometimes a guy in a hoodie actually can be dangerous,” Jost deadpanned, with reference to the tech company’s founder, Mark Zuckerberg.

“Internal documents show that Facebook knew its platform was used to spread hate and misinformation but they hid the evidence. Now, the weird thing is, I went to school with Mark Zuckerberg, and I was there when he created Facebook, and I feel terrible,” Jost continued. “I mean, sometimes I wish I had a time machine, so I could go back to college and find Mark and say, ‘Hey, man…Can I be part of your company?’”

Zuckerberg’s company is also under fire, given reports that its other social media app, Instagram, is causing users to develop a negative body image. “[This] explains their rival’s new slogan, TikTok: Bring Your Fat Ass Over Here,” said Jost.

Che went on to note that Instagram was down earlier this week for an entire day, “forcing many Instagram addicts to fill their time with Twitter, TikTok, or hosting SNL.”

“In the wake of R. Kelly’s sex trafficking conviction, YouTube has removed two channels linked with the singer,” said Che, “one for the singing, and the other, about how to remove stains.”

“Bill Cosby said he thinks R. Kelly ‘got railroaded’ following the singer’s sex trafficking conviction,” added Jost. “Cosby made the comments in the latest issue of Not Helping magazine.”

Jost and Che were subsequently joined by film critic Terry Fink (Alex Moffat), who presented his reviews on everything from No Time to Die (“Bond is back with a license to thrill…audiences”) to Paw Patrol: The Movie (“Quick, someone call Nine Fun Fun. Because this hellish film is a skin-melting nightmare.”)

Also stopping by tonight was Kelly Party (Heidi Gardner), a life coach imparting some wisdom, with regard to the power of positive thinking.

Check back later for clips from tonight’s segments.