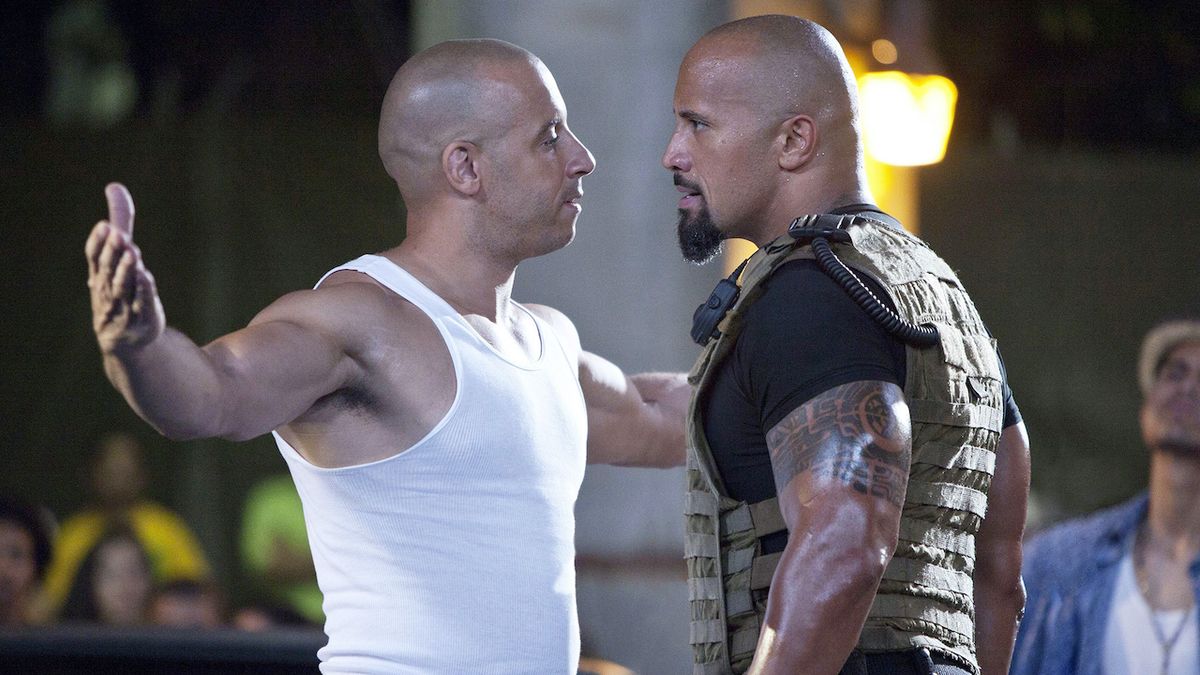 The Fast & Furious franchise continually promotes the importance of family, and that even extends to many of the relationships the main cast members have with each other, such as Jordana Brewster considering Vin Diesel to be like a big brother. But not everyone performer in the Fast & Furious sphere has gotten along splendidly over the years. Arguably the biggest example is the feud Diesel had with Dwayne Johnson, and with four years having passed since these two last shared the screen in The Fate of the Furious, The Rock recently reflected on when he and Diesel were clashing, and how the crew responded to what went down.

To provide some context, Dwayne Johnson made his Fast & Furious debut in 2011’s Fast Five, but by the time The Fate of the Furious rolled around, Dwayne Johnson was so at odds with Vin Diesel that he only agreed to come back for the eighth movie if he and Diesel didn’t share any scenes. But the trouble didn’t end there, and when The Fate of the Furious was wrapping production in 2016, Johnson put up an Instagram post (which he soon deleted) where he complimented his female costars, but referred to some of his male costars as “candy asses.”

It quickly became apparent Dwayne Johnson was referring to Vin Diesel, and in an interview with Vanity Fair, the Hollywood star said that because he’d shared that sentiment publicly, it ended up not being his “best day.” As for whether he regretted the post, Johnson said this:

Dwayne Johnson soon clarified that while he wouldn’t take what he said in the Instagram post, he realized it was a mistake to share those feelings to the public. In his words:

Following the social media escalation, word came in about a “peace meeting” that had been arranged for Vin Diesel and Dwayne Johnson in the latter’s trailer. Here’s how that encounter unfolded, according to Johnson:

Vin Diesel provided his own perspective on the feud back in June, saying how he’d given Dwayne Johnson a lot of “tough love” to ensure his performance was the best it could be. Whoever you align with more in this particular conflict, one thing is certain: The Fate of the Furious likely marks the last time we’ll see Diesel’s Dominic Toretto and Johnson’s Luke Hobbs together. After sitting out F9, Johnson said in July that he will not return for the final two entries in the main Fast & Furious film series. However, Johnson isn’t done with this franchise as a whole, as he’s still attached to do Hobbs & Shaw 2 with Jason Statham.

So for all intents and purposes, Vin Diesel and Dwayne Johnson have gone their separate ways, with the latter saying that he and the former are “philosophically two different people” who “approach the business of moviemaking in two very different ways.” Maybe there’s a chance that Johnson will change his mind and at least cameo in Fast & Furious 10 and/or 11, but for now, you can look forward to seeing him perform opposite fellow Fast & Furious talent Ryan Reynolds and Gal Gadot in Red Notice, which hits Netflix on November 12. Fast & Furious 10 will race into theaters on April 7, 2023.