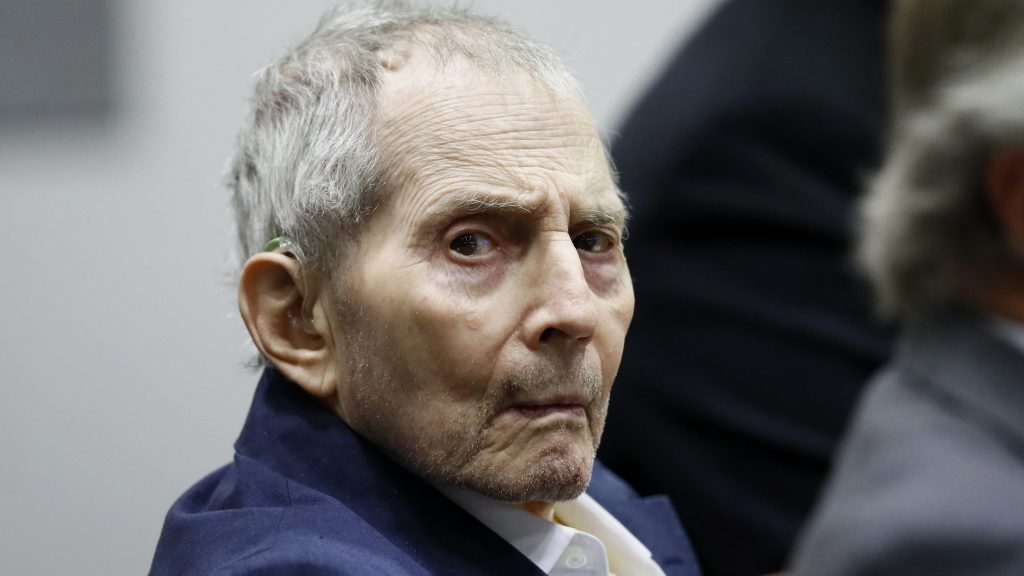 Durst, 78, whose appearance in HBO’s six-part documentary series The Jinx: The Life and Deaths of Robert Durst reignited interest in the case, sat slumped in a wheelchair in the courtroom as the judgement was handed down. At one point, both of his representative seemed to look at him with concern.

The defendant, unshaven and mask slipping down his face, looked even more gaunt than usual, his breathing seeming to increase as the proceeding marched toward its conclusion.

The defense made a motion for a new trial today. It previously contended that there was “insufficient evidence to support the conviction beyond a reasonable doubt, and the verdict was contrary to the evidence and the law.” It cited the lack of forensic evidence. The prosecution contended that such evidence was “a red herring,” and not necessary to convict.

Waldman dismissed the defense motion saying, among other things, that Durst confessed to the killing. That alone, he said, is evidence enough. He was also incredulous at Durst’s explanation of his admission. He found, as a result, “overwhelming evidence of guilt.”

It was Durst’s own off-camera admission of “What the hell did I do?…Killed ’em all, of course” in the March 2015 series finale of the Emmy and Peabody Award-winning The Jinx that saw the long suspected murderer apprehended again by law enforcement. Arrested by the FBI on March 14 of that year on behalf of then L.A. County D.A. Jackie Lacey’s office and on what appeared to be new evidence, Durst was extradited to the West Coast in fall 2015 to face California justice.

He was convicted of first-degree murder on Sept. 17 of this year. The jury also found true the special circumstance allegations of murder while lying in wait and murder of a witness. It likewise found true allegations that Durst personally used and discharged a firearm during the commission of the crime.

Durst has never come clean about whether he murdered his wife Kathie McCormack Durst in the early 1980s, which was the subject of the 2010 film All Good Things, starring Ryan Gosling and Kirsten Dunst. Though he was acquitted on self-defense in 2003, Durst has previously admitted to killing his Galveston, Texas rooming house neighbor Morris Black in 2001.

The Los Angeles Times reported earlier this month that the Westchester County District Attorney’s Office in New York would be convening a grand jury within a few weeks involving the disappearance of Kathie Durst, and that the family’s attorney, Robert Abrams, received an email notifying them that her family members will not be permitted to speak at Durst’s Los Angeles sentencing.

Durst has long been estranged from his real estate-rich family, which is known for ownership of a series of New York City skyscrapers including an investment in the World Trade Center. He split with the family when his younger brother was placed in charge of the family business, leading to a drawn-out legal battle and ultimately reached a settlement in which the family reportedly paid him $60 million to $65 million.

Elvis’ Austin Butler Reveals Immediate ‘Relationship’ With Lisa Marie Presley Before Her Death
Future, Missy Elliott, the Roots, Glorilla, and More to Perform During 50th Anniversary of Hip-Hop Celebration at 2023 Grammys
John Krasinski Has Begun Filming A Quiet Place: Day One, See How He Celebrated
8 New Albums You Should Listen to Now: Young Fathers, the Men, Raye, and More
Director Of Leaving Neverland Blasts New Michael Jackson Biopic, Asks Where The Outrage Is