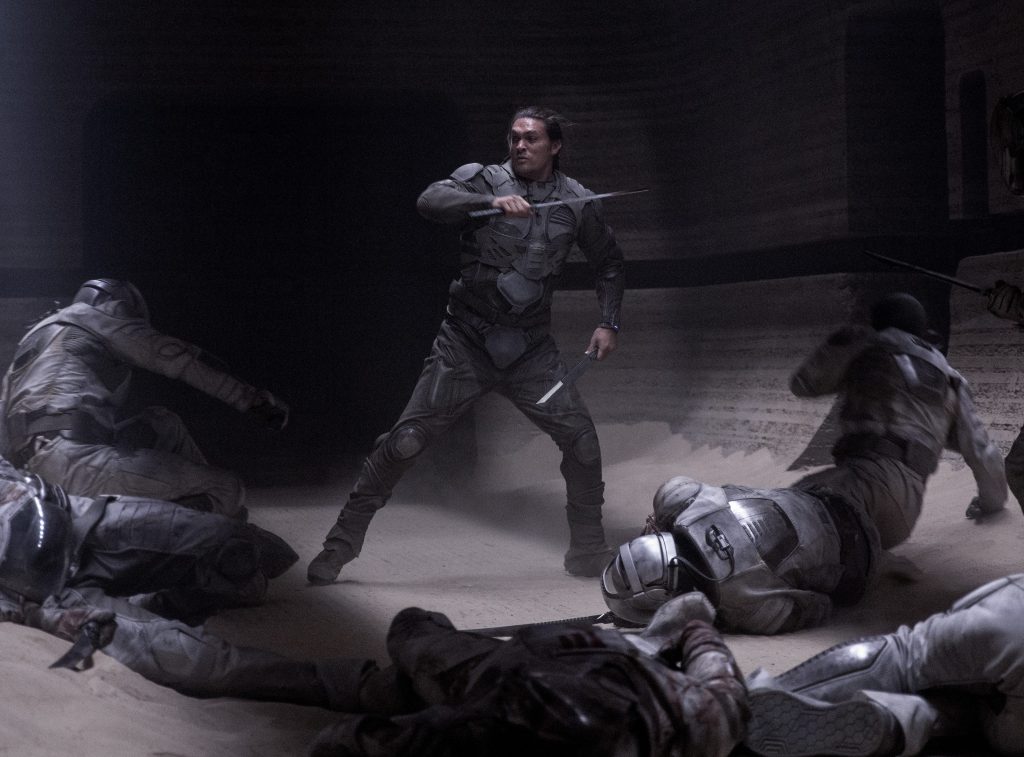 Since being screened to great fanfare before the press since late August, Warner Bros. and Legendary’s $165M sci-fi epic Dune finally lands in U.S. theaters as well as 40 overseas markets, including China with an eye on a global weekend in the $70M+ range. Already, the Denis Villeneuve directed epic, which carries a Rotten Tomatoes of 87% Certified fresh, counts $129.3M at the foreign box office from 36 markets since opening in mid-September in major markets such as Germany and France, led by the latter’s terrific $26.2M take.

The reception among the press and fans since the pic first made its world premiere in Venice, continuing onto TIFF, has been nothing less than ecstatic; with many observing how Villeneuve has done right by Frank Herbert’s 1965 sci-fi classic, which continues to speak to many ongoing themes the globe grabbles with from the environment to political imperialism and commerce.

The swing factor, of course, with Dune‘s ticket sales are no doubt U.S. and Canada. Tracking has the film between $30M-$35M with a theatrical day-and-date debut on HBO Max due to the studio’s pandemic distribution plan this year. Theater count is at 4,100 locations with 7,5K screens. The pic’s upcoming offshore weekend, depending on whether China over-indexes, is at $40M. What’s making predictions hard to nail right now is that we hear from exhibition (not Fandango) that presales for Dune are squashing everything that’s come before it, i.e. No Time to Die, Shang-Chi, F9, Black Widow. From movie theaters’ P.O.V., they’re looking at a $50M domestic start, but that’s hard to call as a day-and-date film like this could be heavily front-loaded and then drop off significantly by Saturday.

To date, the biggest domestic opening for a theatrical-HBO Max movie belongs to Godzilla vs. Kong at $31.6M, and it’s the only title on the studio’s slate this year to clear $100M domestic, and uber grosses around the world at a near $468M. Previews start at 6PM stateside for Dune in 3,200 theaters, and Warners will absorb all of No Time to Die‘s Imax auditoriums, as well as PLF, Dolby Cinema, and Motion Seats.

The HBO Max play is strictly in the U.S. while Canada has the film on PVOD. There was back and forth between Warners and Legendary as whether to make Dune a pure theatrical release, and push it to next year. Ultimately, the cast and filmmakers opted for a payout, similar to those involved on other 2021 Warner Bros. releases, and the dynamic distribution plan were kept intact, this despite Villeneuve protesting the experimental distribution plan publicly when the studio first made their announcement. While extremely few, if any, tentpoles are profiting now in the hobbled global marketplace, insiders tell me that a global take for Dune in the $300M+ range will make many happy from an image-standpoint, even if breakeven is far north of that. Again, in regards to all these tentpoles that have been sitting on a shelf, what’s truly in the black? Let’s be fair. It’s going to be a while before we see a $1 billion global grossing movie.

Even if Dune comes in at $30M, or even $20M, on a dollar basis for late October, it’s a figure that exhibition will still be content with especially with all the other event product they have on the marquee including No Time to Die, Venom: Let There Be Carnage and Halloween Kills. Any dilution of weekend theatrical ticket sales for Dune, are no doubt due to its HBO Max availability. It would be surprising if we see a similar situation to last weekend’s Halloween Kills, which overpowered to a $50M start, even with its availability on Peacock’s pay-tier. Understand that HBO Max has a greater in-home penetration than Peacock.

Any number north of $32.7M, would rep the biggest domestic opening for Villeneuve; that figure being the U.S./Canada start of his previous sci-fi feature Blade Runner 2049 which had a massive budget of $185M, and more limited global appeal with $259.3M WW at the B.O. Even by pre-pandemic standards, I hear Warner Bros. figured a similar domestic result for Dune as Blade Runner 2049‘s $92M, with the greater potential being abroad where these sci-fi spectacles work.

Dune is a challenging IP, based on a 412 page hardcover book, with the previous feature adaptation from director David Lynch and producer Dino De Laurentiis in 1984 being an incomprehensible bomb. Villeneuve has breathed life into the property with heart-thumping action, emotional and tangible characters one cares about and a live location shoot in Jordan, as well as a truly hot, diverse cast including Zendaya, Timothée Chalamet, Jason Momoa, Oscar Isaac, Rebecca Ferguson, Javier Bardem, Josh Brolin, and Stellan Skarsgård. One cannot gripe that Villeneuve didn’t try to make Dune perfect. Unlike the Lynch take, Villeneuve isn’t cramming the entire Herbert novel down audiences’ throats. The intent is that this is part 1 with a sequel already being buzzed to be in the works, no matter what the box office outcome is here.

However with Dune sparking Oscar buzz, an opening weekend surprise at the box office in addition to great viewership on HBO Max would be a victory worth WarnerMedia’s trumpeting, possibly redefining what it means for a piece of IP to be a franchise. Understandable, HBO Max doesn’t have the global footprint of Netflix to thump its chest; that streamer’s most-watched feature being Extraction with 99M households. Anecdotally, HBO Max claims that Godzilla vs. Kong is its most watched feature, however, the conglomerate never released figures to support that claim. Samba TV, which only measures 3M U.S. Smart TV terrestrial households, reports that Mortal Kombat is the most watched Warner Bros. 2021 feature on HBO Max at 5.5M U.S. households, followed by GvK with 5.1M U.S. households through each pic’s first 17 days. Recently, HBO has reported combined linear and HBO Max viewership, claiming that the first episode of Succession season 3 pulled in 1.4M, a high for a series premiere across all platforms, while Mare of Easttown‘s finale currently holds the record for the most-watched finale with 4M over the Memorial Day weekend stretch.

Dune will be the first major Hollywood release to hit China since Disney/20th Century Studios’ Free Guy in late August. That film had a strong run, getting to about $95M before the local National Day movies rolled in. Dune, which Legendary East handles in China, will face off with the holdover play of The Battle Of Lake Changjin which is on its way to becoming the No. 1 movie of 2021 worldwide, from just the Middle Kingdom. Dune also will have just one week before No Time To Die gets to China.

Right now, the sci-fi epic is leading pre-sales for the China three-day weekend and is eyeing a gross upwards of $20M for the frame. The early Douban score from critics is 7.9 (by way of comparison, Free Guy recently had a 7.8). In terms of Villeneuve’s previous titles in the market, Arrival cumed $16M (unadjusted) in early 2017 while Blade Runner 2049 finaled at just $11.7M (also unadjusted) later that year.

Egregiously, a high-res copy of Dune has reportedly leaked online, even ahead of the day-and-date HBO Max release. This is a movie for the big screen, so the hope is that piracy doesn’t do too much damage, though it is a factor to consider.

As for the other markets, look for the UK to be strong — although James Bond is still blasting away there. In Latin America, Sony’s Venom: Let There Be Carnage is currently over-indexing so the region could prove challenging. As for Korea, the market has been exceptionally soft of late, however Venom 2 just had a strong weekend there which could bode well.

Venom skews to a younger demo and Bond to a higher one; from what we’ve seen over the early rollout of Dune, it is playing rather broadly.

Also in the U.S. among big studio wide releases, Disney has the 20th Century Studios/Locksmith Animation feature Ron’s Gone Wrong which is hoping for $10M at 3,550 locations. Previews start Thursday at 6PM. Unlike other family movies during the pandemic, the pic is a pure theatrical release while others like Boss Baby 2, Addams Family 2 and Jungle Cruise have incorporated some theatrical-day-date-in home rollout. The movie at 87% fresh on Rotten Tomatoes follows Barney, a socially awkward middle-schooler and Ron, his new walking, talking, digitally-connected device, which is supposed to be his ‘Best Friend out of the Box.’ Ron’s malfunctions set against the backdrop of the social media age, launch them into an action-packed journey in which boy and robot come to terms with the messiness of true friendship.