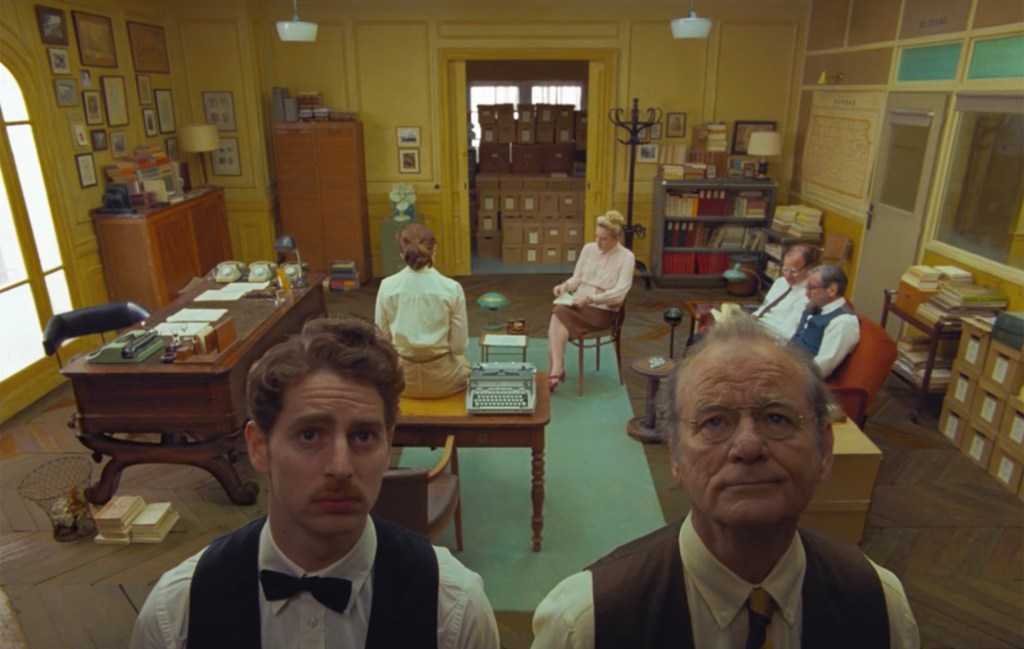 After a long Covid delay, The French Dispatch opens this weekend with distributor Searchlight Pictures and the industry hoping the whimsical Wes Anderson’s film brings a touch of Grand Budapest Hotel-ish coin to the specialty box office.

Hoping, but not counting on it, as the box office take beyond studio tentpoles has been largely dour and stubbornly unpredictable. The French Dispatch debuts in 52 theaters and 14 markets in a crowded field including the pop culture phenomenon called Dune.

Searchlight acquired The French Dispatch in September of 2019 and it was to have played at a Covid-canceled Cannes in 2020. It premiered on the Croisette this year instead, then screened at the BFI London Film Festival, Telluride, the New York Film Festival –hitting 25 fests in all.

“The film appeals to art house fans of all ages and, of course, fans of Wes Anderson and the New Yorker,” Searchlight said. Stylized versions of the magazine’s editors, writers and stories populate the movie.

Deadline’s review says: “If Anthony Lane doesn’t like it, there will be a price to pay. Searchlight Pictures probably shouldn’t even bother to release it in the red states, except maybe in Austin.”

“Because of the nature of moviegoing in recent months, this won’t reach the gross levels of Grand Budapest Hotel or Moonrise Kingdom [2012]. However the reviews are mostly good and there is an audience out there that wants to get out of the house, and this may be the film that will do that,” said Searchlight SVP-General Sales Manager Frank Rodriguez. “To me there is not that much difference between Moonrise Kingdom, Grand Budapest Hotel and this. Wes Anderson makes a certain type of film. Very dense, very humorous, very meticulous, with stories and characters that make you feel good.”

Rodriguez recalled that Best Picture Oscar-winner Budapest Hotel grossed over $200,000 per screen in four theaters on its opening weekend. That was a surprise even at the time — and two or three zeros more than most specialty per screen openings this year.

Rodriguez said Searchlight carefully handpicked the first crop of theaters, a mix of arthouses, upscale urban and suburban multiplexes and as “the best hipster theatres in the country.” He and other specialty distributors have noted a steep drop-off in opening per screen tallies from the top 40-60 theaters to the bottom 200. French Dispatch expands next week to over 500 theatres in more than 60 markets and will add to that the weekend of 11/5.

The arthouse audience tends to be older and slower to return to theaters, although No Time To Die appears to have lured the demo back to cinemas in the greatest numbers since Covid. Anderson’s fantastical films also appeal to a younger crowd. “I think the bottom line for us in terms of what will make for a successful opening is that specialty audiences return to theatres in numbers that resemble what they used to be,” Rodriguez said. A tall order, but it’s got to happen eventually, right?

Amazon’s limited release of Will Sharpe’s The Electrical Life of Louis Wain with Benedict Cumberbatch, Claire Foy, Andrea Riseborough. The true story of eccentric British artist Louis Wain, whose playful, psychedelic pictures transformed the public’s perception of cats forever. Set in the early 1900s, we follow Wain as he seeks to unlock the “electrical” mysteries of the world and, in so doing, to better understand his own life and the love he shared with his wife. Deadline’s review from Telluride. Streaming Nov. 5.

Learning To Live Together: The Return of Mad Dogs & Englishmen from Abramorama, directed and produced by Jesse Lauter. Joe Cocker’s legendary 1970 Mad Dogs and Englishmen tour, immortalized in a live album and concert film, is revisited fifty years later by the first-time filmmaker through the lens of the Grammy Award-winning Tedeschi Trucks Band’s reunion of the Mad Dogs. The film showcases performances from the reunion show, never-before-seen archival materials and commentary from the original members.

Campy comedy thriller The Estate  from Vertical Entertainment by first-time director James Kapner, with Eliza Coupe, Chris Baker and Greg Finley. A narcissistic son yearning for a life of luxury, and his father’s erratic gold-digging wife decide to kill their way into inheritance with the help of mysterious hitman.